Fostedina, The origin of the Frisian Helmet 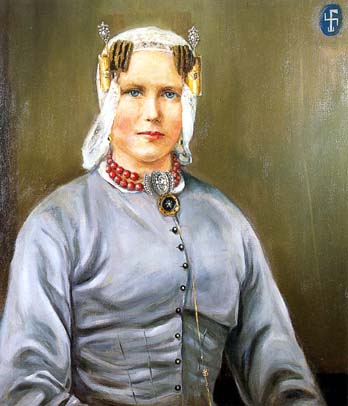 For centuries,  the maidens and
mothers of Friesland have worn a helmet
of gold covering the crown and back of their
heads, and with golden rosettes at each ear. It
marks the Frisian girl or woman. This is the story of why the helmet is worn.
A long time ago there were no churches in Friesland.The people were
pagans and all worshipped Woden, whom the Frisians called Fos-i-te'. Certain trees were
sacred to him. People would bring there sick to the tree and leave them there.
Now among the wild people of the north, who ate acorns and were clothed in the skins of animals, there came, from the Christian lands of the south, a singer with his harp. Invited to the
royal court, he sang sweet songs. To these the king's daughter listened with delight, until the
tears, first of sorrow and then of joy, rolled down her lovely cheeks.
This maiden was the pride of her father. The singer from the south sang a new song,
It was so much finer, and oh! so different, from what the harpers in the king's court usually sang for the listening warriors. Instead of being about fighting and battle, or the hunting of wolves and bears, of stags and the aurochs, it was of healing the sick and helping the weak.
He did not sing about war but about a loving Father in Heaven.
The singer sang of the loving Father in
Heaven, who sent his dear Son to earth to live and
die, that men might be saved.  He also told the story of the crown of thorns, how wicked men nailed this good prophet to a cross.  He
showed greatness in the hour of death, by first remembering his mother, and then by forgiving his enemies.
" What! forgive an enemy? Forgive even the
Danes? What horrible words do we hear!" cried the men of war. " Let us kill this singer from the south." And they beat their swords on their metal shields. The Druids, or pagan priests, even more angry, applauded the action of the fighting men. But Fostedina rushed forward to protect the harper, and her long golden hair covered him." No!" said the king to his warriors. " This man is my guest. I invited him and he shall be safe here."

Only three days before, a party of Christian Danes had been taken prisoners in the forest.
They had come, peaceably and without arms, into the country; for they wanted to tell the Frisians about the new religion, which they had themselves received. In the cold night air, they had, unwittingly, cut off some of the dead branches of a tree sacred to the god Fos-i-te' to start a fire. A spy, who had  watched them, ran and told his chief. Now, the Christian Danes were prisoners and would be given to the hungry
wolves to be torn to pieces. That was the law.

The heart of the beautiful Fostedina, who had heard the songs of the singer of faith in the one God and love for his creatures, was deeply
touched. She resolved to set the captives free. Being a king's daughter, she was brave. So, at midnight, calling a trusty maid-servant,
she went out secretly to the prison pen. She unbolted the door, and, in the name of their God and hers, she bade the prisoners return to their land.

The next morning, when the crowd assembled, but found that they were to be cheated of their bloody sport, they raged and howled. Coming
to the king, they demanded his daughter's punishment. The pagan priests declared that the gods had been insulted, and that their anger
would fall on the whole tribe, because of the injury done to their sacred tree. The hunters swore they would invade the Danes' land and
burn all their churches.
Fostedina was summoned before the council of the priests, who were to decide on the punishment due her. Being a king's daughter, they
could not put her to death by throwing her to the wolves. Bravely she declared that she would suffer, as her Lord did. " So be it," cried the high priest. " Your own words are your sentence. You shall wear a crown of thorns." Fostedina was dismissed. Then the old men sat long, in brooding over what should be done. They feared the gods, but were also afraid of their king. They finally decided that the maiden's life should be
spared, but that for a whole day, from sunrise to sunset, she should stand in the market-place, with crown of sharp thorns pressed down hard upon
her head.
Fostedina refused to beg for mercy.. She dressed herself in white garments. She prayed the Father of all to pardon and forgive. There were
a lot of people who felt sorry for the bleeding maiden wearing the cruel crown.

Years passed by and a great change came over land and people. The very scars on Fostedina's forehead softened the hearts of the people.
Thousands of them heard the words of the good missionaries. Churches arose, on which was seen the shining cross. Idols were abolished
and the trees, once sacred to the old gods, were cut down.The changes, even in ten years, were like those in a fairy tale. Best of
all, a Christian prince from the south, grandson of Charlemagne, fell in love with Fostedina, now queen of the country.
It was a great day for Free Frisia. The wedding was to be in a new church, built on the very spot where Fostedina had stood, in pain and sorrow, when the crown of thorns was pressed upon her brow.
That morning, a group of pretty maidens, all dressed in white, came in procession to the palace. One of them bore in her hands a golden
crown, with plates coming down over the forehead and temples. It was made in such a way that, like a helmet, it completely covered and
concealed the scars of Fostedina. So Fostedina was married, with the golden helmet on her head.

The bride came out of the church. Fostedina was a vision of beauty. Her head-covering looked so pretty, and the golden helmet was so becoming, that other maidens, also, when betrothed, wished to wear it. It became the fashion-for Christian brides, on their wedding days, to put on this glorified crown of thorns.
All the jewelers approved of the new bridal head-dress, and in time this golden ornament was worn in Friesland every day. Thus it has come
to pass that the Frisian helmet, which is the glorified crown of thorns, is, in one form or another, worn even in our day.

Out from this northern region, and into all the seventeen provinces of the Netherlands, the custom spread. In one
way or another, one can discern, in the headdresses or costumes of the Dutch and Flemish women, the relics of ancient history.
When Her Majesty, the old Dutch Queen, visited the Frisians, in the old land of the north, which her fathers held so dear, she, out of compliment
to Free Frisia, wears the ancient costume, with the golden helmet. Those who know the origin of the name Wilhelmina read in it the true meaning, which is, " The Sovereign Lady of the Golden Helm."